The Blind Men and the Elephant is a famous Indian fable that tells the story of six blind men that come across different parts of an elephant in their life journeys. Let us understand the deeper aspect of the story and avoid becoming one of them.


Six Blind Men and the Elephant

A long time ago, in the valley of the Brahmaputra in India there lived six men who were much inclined to boast of their wit and lore. Though they were no longer young and had all been blind since birth, they would compete with each other to see who could tell the tallest story.
One day, however, they fell to arguing. The object of their dispute was the elephant. Now, since each was blind, none had ever seen that mighty beast of whom so many tales are told. So, to satisfy their minds and settle the dispute, they decided to go and seek out an elephant.
Having hired a young guide, Dookiram by name, they set out early one morning in a single file along the forest track, each placing his hands on the back of the man in front. It was not long before they came to a forest clearing where a huge bull elephant, quite tame, was standing contemplating his menu for the day.
The six blind men became quite excited; at last they would satisfy their minds. Thus it was that the men took turns to investigate the elephant's shape and form.
As all six men were blind, neither of them could see the whole elephant and approached the elephant from different directions. After encountering the elephant, each man proclaimed in turn:
'O my brothers,' the first man at once cried out, 'it is as sure as I am wise that this elephant is like a great mud wall baked hard in the sun.'
'Now, my brothers,' the second man exclaimed with a cry of dawning recognition, 'I can tell you what shape this elephant is - he is exactly like a spear.'
The others smiled in disbelief.
'Why, dear brothers, do you not see,' said the third man -- 'this elephant is very much like a rope,' he shouted.
'Ha, I thought as much,' the fourth man declared excitedly, 'This elephant much resembles a serpent.'
The others snorted their contempt.
'Good gracious, brothers,' the fifth man called out, 'even a blind man can see what shape the elephant resembles most. Why he's mightily like a fan.'
At last, it was the turn of the sixth old fellow and he proclaimed,
'This sturdy pillar, brothers of mine, feels exactly like the trunk of a great areca palm tree.'
Of course, no one believed him.
Their curiosity satisfied, they all linked hands and followed the guide, Dookiram, back to the village. Once there, seated beneath a waving palm, the six blind men began disputing loud and long. Each now had his own opinion, firmly based on his own experience, of what an elephant is really like. For after all, each had felt the elephant for himself and knew that he was right!
***
People who are attempting to understand The Absolute Truth, The God, on their own endeavor, by their mental speculation, are in no better situation than these blind men. Just as each one of the blind men grabbed one part of the elephant and assumed a shape for elephant, many time these mental speculators feel or grab one aspect of the Absolute Truth and hence they get bewildered,  confused and hence doesn't get a complete picture of the Absolute Truth.
Just as it happened with the blind men, each was firmly believing their assumption about the elephant, mental speculators also have a firm belief about their speculation about God. This is the prime reason for disrespecting other religions and hatred and intolerance. If the blind men were wise, they should have understood their limitations & approached their guide, Dookiram, the one who had eyes. Similarly, even we should give up fruitless attempt of mental speculation and surrender to a wise man, whose spiritual eyes are wide open. This is why scriptures repeatedly insist on accepting knowledge in a proper disciplic succession.


The Supreme Self can never be known by any amount of argument, reasoning, intelligence, or by much hearing.
(Katha Upanishad 1.2.23)

Only unto those great souls who serve the spiritual master and the Lord with implicit faith is the import of the Vedas fully revealed.
(Svetasvatara Upanishad 6.23)

Just try to learn the truth by approaching a spiritual master. Surrender to him and inquire from him and render service at his lotus feet. The self-realized soul can impart knowledge unto you, for he has seen the truth.
(Bhagavad-gita 4.34)

In the Padma Purāṇa it is clearly said,

If one does not follow the four recognized disciplic successions, his mantra or initiation is useless. In the age of Kali there will be four sampradayas. In other words, if one desires to take up spiritual life, it is imperative that one follows a genuine sampradaya. Otherwise, our condition will be like "The blind leading the blind". 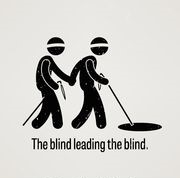 Please read our article to know about Sampradaya.
Summary of lessons learned:

***
Thank you for reading this article.
If You have Liked it, then please share it with your friends and loved ones. Please feel free to suggest how can we further improve our service. For more interesting articles please check - https://www.padaseva.in/p/sitemap.html