The Divine and Transcendental Qualities of Krishna

“The transcendental qualities of Lord Kṛṣṇa are unlimited. Out of these, sixty-four are considered prominent. The ears of the devotees are satisfied simply by hearing all these qualities one after the other.
[Sri Caitanya Caritamrita - Madhya-līlā 23.69]

Attempting to analyze the transcendental qualities of Krishna is like counting the ocean waves. Like Sri Chaitanya Mahaprabhu, who is Krishna Himself, has said - Krishna has unlimited qualities. Out of which 64 are most prominent. This article will be attempting to discuss on these 64 qualities.

I am the source of all spiritual and material worlds. Everything emanates from Me. The wise who perfectly know this engage in My devotional service and worship Me with all their hearts.
[Bhagavad Gita - 10.8]

Neither the hosts of demigods nor the great sages know My origin or opulences, for, in every respect, I am the source of the demigods and sages.
[Bhagavad Gita - 10.2]

From the above verses of Bhagavad Gita, one can clearly understand Krishna as the Origin of the entire creation, including all Demi-Gods and Sages.

From the above verse of Srimad Bhagavatam, one can clearly understand Krishna as The Original Personality of Godhead and as the fountainhead of all incarnations including Balaram, Narayan, Vishnu.

So Krishna is the original living entity and from Him emanates many other living entities, which can be classified into three grades, as explained below

For example, some electric bulbs have the power of one thousand candles, some have the power of five hundred candles, some the power of one hundred candles, some fifty candles, etc., but all electric bulbs have light. Light is present in every bulb, but the gradations of light are different. Similarly, there are gradations of Brahman. The Viṣṇu svāṁśa expansions of the Supreme Lord in different Viṣṇu forms are like lamps, Lord Śiva is also like a lamp, and the supreme candle power, or the one-hundred-percent light, is Kṛṣṇa. The viṣṇu-tattva has ninety-four percent, the śiva-tattva has eighty-four percent, Lord Brahmā has seventy-eight percent, and the living entities are also like Brahmā, but in the conditioned state their power is still more dim. There are gradations of Brahman, and no one can deny this fact.
[Srimad Bhagavatam 4.1.15 - Purport ]

The Supreme Personality of Godhead, Krishna, is the origin.

According to the Vedic conception, there are two types of expansions:

There are many varieties of personal expansions: puruṣa-avatāras, śaktyāveśa-avatāras, manvantara-avatāras, and so on. For the creation of this material world, the Lord expands as Brahmā, Viṣṇu, and Maheśvara (Śiva).

Out of the 64 Qualities of Krishna, the first fifty (50) qualities may appear partially in Jiva. These will be more prominent in Lord Brahma, however for us in a conditioned state, these might not manifest in full.

atha pañca-guṇā ye syur aṁśena giriśādiṣu
‘Apart from these fifty qualities, there are five other qualities found in the Supreme Personality of Godhead that are partially present in demigods like Śiva.
[Sri Caitanya Caritamrita - Madhya-līlā 23.77]

athocyante guṇāḥ pañca ye lakṣmīśādi-vartinaḥ avicintya-mahā-śaktiḥ koṭi-brahmāṇḍa-vigrahaḥ
There are another five qualities, which exist in the Vaikuṇṭha planets in Nārāyaṇa, the Lord of Lakṣmī. These qualities are also present in Kṛṣṇa, but they are not present in demigods like Lord Śiva or in other living entities.
[Sri Caitanya Caritamrita - Madhya-līlā 23.80]

Besides all of the above-mentioned fifty qualities, Lord Krishna possesses five more, which are sometimes partially manifested in Lord Siva. These transcendental qualities are as follows:

Krishna also possesses five other qualities, which are manifest in the body of Narayana / Vishnu, and they are listed as follows:

He has inconceivable potency.
Uncountable universes generate from His body.
He is the original source of all incarnations.
He is the giver of salvation to the enemies whom He kills.
He is the attractor of liberated souls.

Besides these sixty transcendental qualities, Krishna has four more, which are not manifested even in the Vishnu / Narayana form of Godhead, what to speak of the demigods or living entities. They are as follows:

He is the performer of wonderful varieties of pastimes (especially His childhood pastimes
He is surrounded by devotees endowed with a wonderful love of Godhead.
He can attract all living entities all over the universes by playing on His flute.
He has a wonderful excellence of beauty that cannot be rivaled anywhere in the creation.

Therefore we can summarize as
. 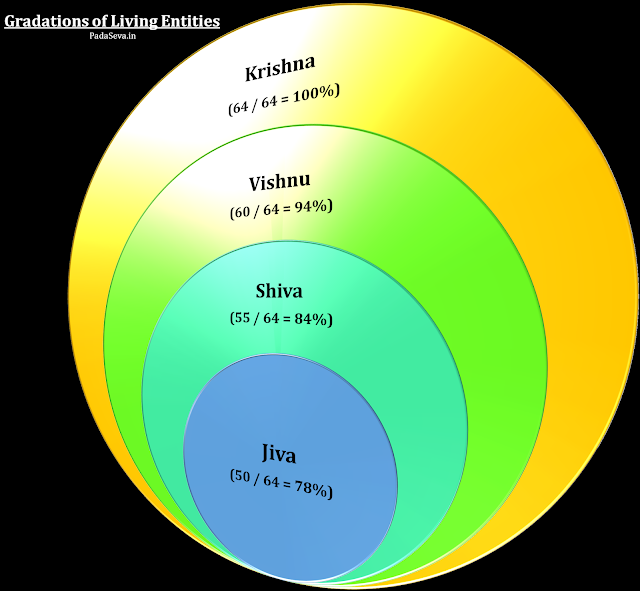 To know more about Krishna who is also known as Param Purushottam, Purnavatar or Supreme Personality of Godhead, please read our article - Is Krishna Avatar of Vishnu?

Learned scholars in transcendental subjects have carefully analyzed the summum bonum Krsna to have sixty-four principal attributes. All the expansions or categories of the Lord possess only some percentages of these attributes. But Sri Krsna is the possessor of the attributes cent percent.

And His personal expansions such as svayam-prakasa, tad-ekatma up to the categories of the avataras who are all visnu-tattva, possess up to ninety-three percent of these transcendental attributes.

Lord Siva, who is neither avatara nor avesa nor in between them, possesses almost eighty-four percent of the attributes. 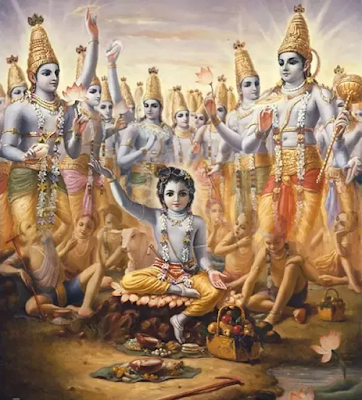 The godly living beings who are all residents of the planets in the spiritual sky are eternal associates of God in different spiritual planets called Hari-dhama and Mahesa-dhama.

The abode of Lord Krsna above all spiritual planets is called Krsnaloka or Goloka Vrndavana, and the perfected living being, by developing seventy-eight percent of the above attributes in fullness, can enter the planet of Krsnaloka after leaving the present material body..

***
Thank you for reading this article.
If You have Liked it, then please share it with your friends and loved ones. Please feel free to suggest how can we further improve our service.
Hare Krishna!