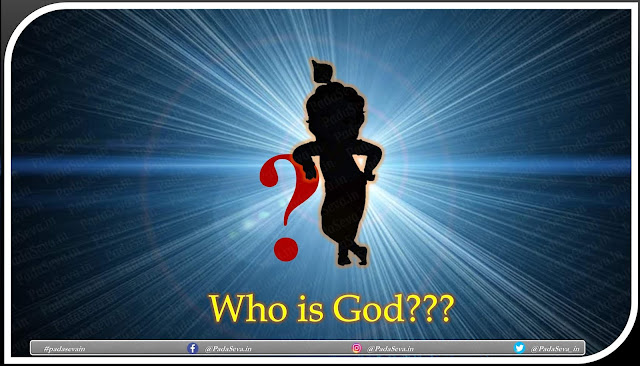 Every religion says there is only one God, as mentioned in their scripture. Islam says Allah, Sanatan Dharma says Bhagavan, Christianity calls Him God or Christ and so on. So who is God?
Sanskrit term for God is Bhagavan.

Understanding the meaning of Bhagavan

The Sanskrit word bhagavān is explained by the great authority Parāśara Muni, the father of Vyāsadeva. The Supreme Personality who possesses all riches, all strength, all fame, all beauty, all knowledge and all renunciation is called Bhagavān. There are many persons who are very rich, very powerful, very beautiful, very famous, very learned, and very much detached, but no one can claim that he possesses all riches, all strength, etc., entirely.
Bhagavad Gita 2.2 Purport

A human can also possess the six opulence, but in minute quantity. Like a person might be beautiful, but he cannot claim to be most beautiful in the entire existence, past-present-future. Even then, owning a minute fraction of one or more of this six opulence makes a person so attractive. Celebrity or glamour industry has a huge attraction for their beauty, personalities like Einstien, Stephen Hawkins because of their knowledge, personalities like Mother Terresa because of renunciation, similarly, the world's richest, strongest people are also attractive. But no one can claim they have 100% of the opulence.
The personality who can claim 100% in each of the six opulence is Bhagavan. It is not just in Vedic Literature but every bonafide scripture like Holy Quran, Bible, Torah etc. describes Allah or God or Bhagavan as the richest, strongest, most beautiful, most intelligent or in short everywhere it is agreed that He is full in all opulence. And there no one equal to Him nor above Him.
If having a minute fraction of even one opulence can make a person attractive, then it is not surprising to imagine how supremely attractive will the person be who has all the six opulence in full 100%. Additionally, Srila Jiva Goswami, the 16th century Vaishnava philosopher, says that Bhagavan is

bhajaniya guna ca ananta ca nityah  He that possesses all adorable qualities and whose all-attractive nature is such that He attracts our feelings of affection and adoration.
Srila Jiva Goswami


krishir bhu-vacakah shabdo nash ca nirvritti-vacakah tayor aikyam param brahma krishna ityabhidhiyate The syllable krish refers to the all-attractive quality of Krishna, and the syllable na refers to His spiritual bliss. When the verb krish is added to the affix na, it becomes the word Krishna, indicating the Supreme Truth.
(Mahabharata, Udyoga-parva 71.4)

Thus God or Bhagavan is Krishna and Only Krishna is Bhagavan or God.

The Supreme Personality of Godhead, Krishna Himself appears once in the day of Brahma. He chooses to come during the end of Dwapara Yuga because He knows in the next Yuga (Kaliyuga), people will be misguided by the influence of Kali. So Krishna comes to display His Colorful Pastimes which is eternally going on in His Spiritual Abode. He comes here to attract the fallen souls. He also knows in Kaliyuga, innocents will be cheated and misguided by so-called spiritualists. Thus they will not know who is God. Hence Krishna during His pastimes in this planet has demonstrated His opulence to make the intelligent know He is the Supreme Personality of Godhead.

Krishna has unlimited strength. His strength was present from the moment of His birth. When Krishna was only three months old, the Putana demon attempted to kill Him, but instead, she was killed by Krishna. Krishna had killed so many demons single-handedly, effortlessly in His childhood. He has displayed His strength by holding the huge Goverdhan Mountain on the little finger of His left hand, for seven days and nights. That is God. God is always God from the beginning. He does not become God by some meditation or mystic power.

Krishna declares in Bhagavad Gita 5.29 that he is sarva-loka-maheśvaram - Lord or controller of all planets and the demigods. Hence he is not just a king of a piece of land, city or country or planet. He is Jagannath.

bhoktāraṁ yajña-tapasāṁ sarva-loka-maheśvaram suhṛdaṁ sarva-bhūtānāṁ jñātvā māṁ śāntim ṛcchati A person in full consciousness of Me, knowing Me to be the ultimate beneﬁciary of all sacriﬁces and austerities, the Supreme Lord of all planets and demigods, and the benefactor and well-wisher of all living entities, attains peace from the pangs of material miseries.
(Bhagavad Gita 5.29)

Krishna is the root of all knowledge. He Himself declares this in Bhagavad Gita

sarvasya cāhaṁ hṛdi sanniviṣṭo mattaḥ smṛtir jñānam apohanaṁ ca vedaiś ca sarvair aham eva vedyo vedānta-kṛd veda-vid eva cāham I am seated in everyone’s heart, and from Me come remembrance, knowledge and forgetfulness. By all the Vedas, I am to be known. Indeed, I am the compiler of Vedānta, and I am the knower of the Vedas.
(Bhagavad Gita 15.15)

Madan (Cupid) is known to be very attractive. But Krishna is known as Madan Mohan, someone who has attracted even Cupid. Also in the below verse of Brahma Samhita, Krishna's beauty is compared to million of cupids

veṇuṁ kvaṇantam aravinda-dalāyatākṣam- barhāvataṁsam asitāmbuda-sundarāṅgam kandarpa-koṭi-kamanīya-viśeṣa-śobhaṁ govindam ādi-puruṣaṁ tam ahaṁ bhajāmi I worship Govinda, the primeval Lord, who is adept in playing on His flute, with blooming eyes like lotus petals with head decked with peacock's feather, with the figure of beauty tinged with the hue of blue clouds, and His unique loveliness charming millions of Cupids.
(Brahma Samhita 5.30)

At the same time, Krishna possesses full renunciation (vairagya). So many things are working under Krishna's direction in this material world, but actually, Krishna is not present here.

mayādhyakṣeṇa prakṛtiḥ sūyate sa-carācaram hetunānena kaunteya jagad viparivartate This material nature, which is one of My energies, is working under My direction, O son of Kuntī, producing all moving and nonmoving beings. Under its rule this manifestation is created and annihilated again and again.
(Bhagavad Gita 9.10)

Also during His pastimes, he has displayed His renunciation, we all know how dear is Vrindavan to Krishna, gopis were the topmost devotees of Lord and Srimati Radha Rani was the epitome of devotion. Vrindavan, Gopis and Radha Rani were the controller of Krishna's senses. Yet He renounced everything and left.

Position of Krishna from Scriptures

Let us see a few quotes from scriptures which declare the position of Krishna.


ishvarah paramah krishnah sac-cid-ananda vigrahah anadir adir govindah sarva-karana-karanam Kṛṣṇa who is known as Govinda is the Supreme Godhead. He has an eternal blissful spiritual body. He is the origin of all. He has no other origin and He is the prime cause of all causes.
(Brahma-samhita 5.1)
ete camsha kalah pumsah krishnas tu bhagavan svayam indrari vyakulam lokam mridayanti yuge yuge All of the above-mentioned incarnations are either plenary portions or portions of the plenary portions of the Lord, but Lord Śrī Kṛṣṇa is the original Personality of Godhead. All of them appear on planets whenever there is a disturbance created by the atheists. The Lord incarnates to protect the theists.
(Shrimad Bhagavatam 1.3.28)
harir eva sadaradhyam sarva-deveshvareshvaram itare brahma-rudradya navaj-eyam kadacana Only Shri Hari (Krishna) should be worshiped as the Master of the entire universe. Brahma, Shiva and all other demigods never violate this principle at any time.
(Padma Purana)
yatravatirnam krishnakhyam param brahma narakritim When the Supreme Person descends in His human like form, He is Krishna, the Supreme Brahman.
(Vishnu Purana 4.11.2)
tasmat krishna eva paro devas tam dhyayet tam raset tam bhajet tam yajet Thus Krishna is the Supreme Person. One should meditate on Him. One should delight in Him. One should worship Him and make offerings to Him.
(Gopala-tapani Upanishad 1.54)
mattaḥ parataraṁ nānyat kiñcid asti dhanañ-jaya mayi sarvam idaṁ protaṁ sūtre maṇi-gaṇā iva O conqueror of wealth, there is no truth superior to Me. Everything rests upon Me, as pearls are strung on a thread.
(Bhagavad Gita 7.7)
brahmaṇo hi pratiṣṭhāham amṛtasyāvyayasya ca śāśvatasya ca dharmasya sukhasyaikāntikasya ca And I am the basis of the impersonal Brahman, which is immortal, imperishable and eternal and is the constitutional position of ultimate happiness.
(Bhagavad Gita 14.27)

Following are excerpts from Chapter 5 "Yoga and Meditation" of the book "The Journey of Self Discovery" by Srila Prabhupada.

The purpose of religion is to understand God and to learn how to love God. Any religious system, if it teaches one how to love God, is first class. Otherwise, it is useless.

But our love must be without selfish motive. If I say, “I love God because He supplies me very nice things for my sense gratification,” that is not love. Real love is without any selfish motive (ahaitukī). We must simply think, “God is great; God is my father. It is my duty to love Him.” That’s all. No exchange—“Oh, God gives me my daily bread; therefore I love God.” No. God gives daily bread even to the animals—the cats and dogs. God is the father of everyone, and He supplies food to everyone. So, appreciating God because He gives me bread—that is not love. Love without motive. I must think, “Even if God does not supply me daily bread, I’ll love Him.” This is real love. As Caitanya Mahāprabhu says, āśliṣya vā pāda-ratāṁ pinaṣṭu mām adarśanān marma-hatāṁ karotu vā: “O Lord, You may embrace me, or You may trample me down with Your feet. Or You may never come before me, so that I become brokenhearted without seeing You. Still, I love You.” This is pure love of God. When we come to this stage of loving God, then we’ll find ourselves full of pleasure. Just as God is full of pleasure, we’ll also be full of pleasure. This is perfection.

Krishna is The Supreme Personality of Godhead. There is no truth beyond Him. This busts the myth that Hinduism or Sanatan Dharma supports Polytheism. Reality is even Hinduism or Sanatan Dharma supports the fact that there is only one God. There are 33 crores Demi God's (devis and devatas like Shiva, Brahma, Indra, Chandra, Durga, Kali, etc.) but there is only one Bhagavan.
This brings to a very important conclusion, that Krishna is not just a Hindu God or a sectarian God. Every religion speaks about Krishna because there is only one God. Therefore Krishna consciousness is not a sectarian religious faith; it is a teaching process for understanding the Supreme Lord and our relationship with Him and meant for the entire humanity. Chaitanya Mahaprabhu, who was Krishna Himself, said namnam akari bahudha nija-sarva-shaktis (O my Lord, Your holy name alone can render all benediction to living beings, and thus You have hundreds and millions of names). God is unlimited, so His qualities are also unlimited. His names identify Him by His qualities, hence he has millions of name. Krishna is one of the unlimited names, but it is more personal. We may call Him Allah, or Jehovah or  Christ or Bhagavan or Hari or Madhava or Krishna or by any name that attracts us and connects us to Him. All the violence caused in the name of religion can be immediately stopped by understanding this simple fact that every religion is glorifying One God and teaching us how to Love Him and Serve Him.
***
Thank you for reading this article.
If You have Liked it, then please share it with your friends and loved ones. Please feel free to suggest how can we further improve our service. For more interesting articles please check - https://www.padaseva.in/p/sitemap.html
Hare Krishna!
PreviousLord Jagannath Baladev Subhadra Maharani | Drawing
NextLord Krishna | Drawing