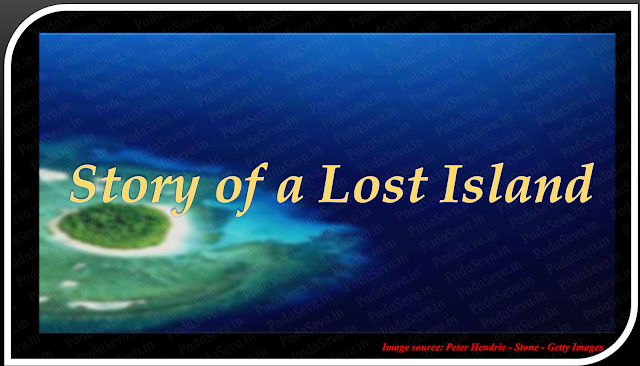 Hidden from modern history, is the story of The Island in the far Eastern Ocean. The island, small enough to be visible in the map, was engulfed by the ocean, overnight, just like a penny it sank to the bottom of the ocean bed.  Never discussed, never will be discussed the night when a portion of humanity felt a shiver in their spine.
Legend says the island was inhabited by a highly advanced Human Race. The Northern horizon of the island was covered with dense forest. That forest was inhabited by Sages who could see the unseen. They never walked the soil of the city for they were immersed in the pursuit of self-realization.
That day, early morning when the city was still not fully awake, 5 people saw a hazy figure appearing from the northern horizon. Never did they see or hear anyone walking from the north.
It was the man of wisdom, with Lean body, long beard and matted hair. He spoke in a grave voice,

"hear me carefully, the land on which you stay will be snatched right away and will be a property of the kingdom of water. Leave the land before you are engulfed by the waves. Reach the Eastern Edge of the forest which connects to the shore, follow the path, when the sun starts to dissolve in ocean, take to the waters keeping the Shiny Eye of Sky, which never moves, to your east, you will reach a bigger island. A land of promises, covered by flowers and fruits. Those who reach there shall never be touched by the waves of ocean nor will they ever return to this little land."

Finishing his words the sage walked back to the forest.
The 5 men were struck with wonder. Jaw dropped to their feet, they kept staring at the sage slowly disappearing into the woods.
Soon the silence was broken by one,

"Haah!! Land, kingdom of water, all rubbish. How did he know this? How does he know if there is another island at all? We all have to die one day. Why listen to this beggar who can't feed his skinny body. He has gone mad due to malnutrition".

Saying this he went on to his work.
Seeing him walking away, second said,

"Well we all will have to die one day.  We were born on this island like body grows hairs. So just like hair belongs to the body, we belong to the island. This island was born from the womb of waters. So we all belong to water. Don't be afraid for I know, for certain, the hidden message of the sage, we all are ultimately water, contained in different vessels. Which means I am you, you are me, we all are same. So we all wait to be dissolved in water and rule the kingdom of water. But till that happens, let us help each other, for we are the same water. Let us make this island a better place to live in. I will go to the people and request them to donate gold to me. With that gold, I will build a school to earn more gold. And then I will build more hospitals. I will feed every hungry people on this island. Oh, fools why dig a well to drink water, don't you see you are yourself water for you drain tears, sweat and urine? Serve the other people for they are the pot of water standing in front of you and your thirst will be quenched."

and he left.
Confused by what he heard, the third one said pinching his hand

"Am I water? Then why am I having limbs? Why did the water decide to enter different vessel if ultimately it wanted to merge back within itself? All rubbish crap. I am no water. The sage is the man of wisdom, he can't be wrong. His message was loud and clear. It doesn't require any interpretations. I am leaving for the eastern horizon"

"But there are so many people around, so many animals who can't fly. Shouldn't they be saved?"

Asked the other two.

and the person ran.
Fourth nodded in disagreement and said,

"Indeed the sage was a man of wisdom. Indeed the power of the cloud has chosen to reveal the secret to us. But we should let others know. We should now be His messenger and help everyone escape"

and he swiftly ran through the city lanes.
Fifth thought to himself while watching the fourth disappear in the lanes,

"Let me gather my family and my cattle first and try to reach the Eastern horizon. I will also assist the nice man (fourth) in helping everyone leave the island before it is too late"

The Fourth man ran door to door knocking and informing everyone. Filled with compassion he forgot about his own safety.
As the sun rose in the sky, the land rumbled many times. Birds filled the sky screeching accompanied by monkeys hooting. But to his horror, he saw a majority of the inhabitants had accompanied the second person. Some were planning to build a huge wall around the island to prevent water from entering the city. Some were planning to build schools and hospitals. They had wizards who could make things appear and disappear with spells.
He explained

"You cannot live here happily for the land has given its warning. Please do not commit suicide."

But the people said

"Helping one another is the goal and service of humanity. We are not cowards like you. We have a social responsibility. We cannot run away from our responsibility like you"

With a sad heart, the fourth returned with silent helpless prayer for the fools. With a very little number of people following his lead, he humbly made his way to the Eastern coast. His followers took the cattle and the beast along with them.
In the crowd, he found a man carrying a huge huge huge pile of load on his back. With every step he tried to advance, the weight made him fall down. When he was suggested to leave the baggage, this man became furious. Thus he was left alone.
Moving ahead there was another man, who wanted to leave but his wife and 5-year old son were still sleeping. So he thought,

"I still have time. Let them wake up and then when we all are ready, we will waste no time and leave."