Who is Lord Siva? | Surprising Facts You Didn’t Know About Lord Shiva
Jaideep and Rusha
March 9, 2020
8:42 pm
3
Category : 03. Who is God 05. Busting the Myth genuine Sampradaya Krishna Lord Shiva Lord Siva Shiva Puran Vaisnava
Shiva - Who is Lord Shiva? Who is the Lord of Shiva? Is Lord Shiva a human? Origin of Shiva? Whom does Shiva Meditate upon? 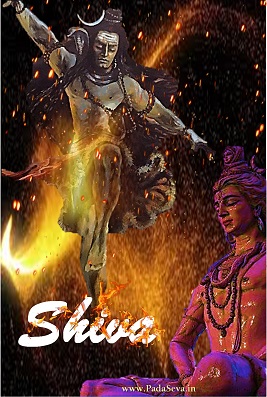 Shiva is one of the most widely worshiped and most misunderstood personality in Hinduism. Many worship him but hardly know about Him. Whatever is known, is dominated and misguided by fiction writers, TV Serials or non-authentic guru or institutions. Let us dive into the scriptures to get authentic understanding of this great personality.

Shiva means "The Auspicious One," He is one of the powerful controllers of the material world.
Many people depict Shiva as an intoxicant, who smokes weed. This is a complete misrepresentation of the personality. Many think Shiva as the formless universe. Many think Shiva to be a concept. There are many different interpretations of Shiva which are nowhere mentioned in scriptures.
Rather than discussing the non-bonafide representations or whimsically motivated interpretations, let us understand the true identity of Shiva as revealed in Scriptures. 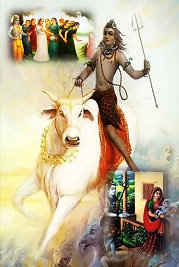 While describing the greatness of Srimad Bhagavatam, Suta Goswami compares it with Lord Shiva.

Shiva proves his devotion to Krishna repeatedly. Be it serving as Hanuman to Lord Rama or as Advaita Acharya to Sri Chaitanya Mahaprabhu. And in the Dwapar Yuga when Krishna appeared in His Original form, Lord Shiva made repeated attempts to behold His eternal Master. His love for Krishna is so deep and pure that he readily gave up His masculinity and turned into a gopi. Thus known as Gopeshwara Mahadev. Thus he taught with his example that there is only one Purush (enjoyer) - Krishna, rest all are feminine, prakriti (enjoyed).

Mahajans means authority. One must understand the position of the Supreme Lord, Krishna, through the authorities, or mahājanas. There are 12 Mahajans and Lord Shiva is one amongst them.

Shiva as a Vaisnava

Shiva can be observed in scriptures taking no break in glorifying The Supreme Personality of Godhead, Krishna. He goes on and on and on.
For example, 71st chapter in Utarakhanda of Padma Puran, when mother Parvati asks Lord Shiva, who is the object of His meditation, He goes on and on glorifying Lord, from 89th verse till 312th verse. Few excerpts from this -

When mother Parvati asks a question, which is the name which is as potent as 1,000 names of Lord Vishnu ...

But, O lord due to my mind attached to lust etc., due to my having been one with you, due to an error, if I am unable to recite every day these thousand names of Viṣṇu, then tell me, O bull-bannered god, that name, by which I shall get that fruit (obtained by the recital of Viṣṇu’s thousand names).
Mother Parvati to Shiva - Padma Puran


This is not just one place, Shiva has been observed in many places, teaching mother Parvati the essence of Vedic Scriptures to be rendering devotional service onto Vishnu or Krishna. Not only this, but Shiva's service to the Lord can also be seen in His various pastimes. Even in his incarnation as Hanuman, He was one-minded focused on Lord's service.

Lord Shiva resides as Nandishwara meditating on Lord Krishna and awaiting His darshan near Nandagaon, as Gopeswhara and Banakhandi Mahadeva serving Krishna in Vrindavana, as Vishwanatha praying in baisi pahaca near the entrance of Lord Jagannatha’s temple in Puri, as Lingaraja receiving the prasada of Ananta Vasudeva in Bhubaneshwar and as Sri Manjunatha worshipping Narasimhadeva in Dharmasthala.

Adi Shankaracharya was the incarnation of Lord Shiva. In this incarnation, He spreads the Mayavad Philosophy, which establishes the false position of Jiva to be on the same platform as Lord Vishnu / Narayan. This philosophy propagates the myth that Lord is formless. The philosophy of Mayavad is completely imaginary and extremely dangerous to devotional life. This service by Shiva in the form of Adi Shankara was to separate the atheistic crowd from devotees. It was also done under the instruction of the Supreme Lord. In Shiva Purana the Supreme Personality of Godhead told Lord Shiva:

On this context, Shiva speaks to Mother Parvati in Padma Puran


So Shankaracharya philosophy basically doesn't believe in the forms and qualities of Lord. It says nirguna Brahman is the Absolute Truth. However, during his last days, he composed following verses,

kadacit kalindi-tata-vipina-sangita-taralo
mudabhiri-nari-vadana-kamalasvada-madhupah
rama-shambhu-brahmamara-pati-ganesha-arcita-pado
jagannatha svami nayana-patha-gami bhavatu me
Who sometimes fervently plays His flute on the banks of the Yamuna river in Sri Vrindavana, who is like a bumblebee that blissfully tastes the lotus faces of the Vraja-gopis, and whose feet are worshipped by great personalities such as Laksmi, Shiva, Brahma, Indra, and Ganesha — may that Sri Jagannatha-deva be the object of my vision.
[Jagannathashtakam by Adi Sankaracharya]

Someone whose philosophy is based on formless Brahman, who doesn't believe in the beautiful form of Lord, how can He compose such deep verses on Govinda or Jagannatha. The person who think Absolute is formless wouldn't have any faith or inclination towards any deity, let alone Supreme Personality of Godhead - Krishna / Govinda / Jagannatha. Fact is Shiva couldn't hide his devotional heart even in the form of Shankara and composed following verses which clearly shows his devotional heart and gives a clear message - ultimate epitome of spiritual practice and philosophy is Devotional Service onto Krishna
This is why even though Sri Chaitanya Mahaprabhu, He warned everyone against the poisonous philosophy of Mayavad, but, never blamed His dear devotee, Lord Shiva.

The Absolute Truth, Krishna, is anandamaya (desiring to increase His joy), hence from His original form He expands and becomes many. The Lord's various expansions and the Lord Himself simultaneously co-exist. These expansions of the Supreme Being are known as Vishnu-tattva, and they are also Supreme Absolute Truth. Although non-different from the Supreme Lord, the Vishnu-tattvas all accept their own role as Godhead in the mood of Servitor to the "original" Supreme Being. This relationship is the foundation of Vedic monotheism, which encompasses the inconceivable, absolute personal nature of the original Godhead.

The Supreme Being possesses two other expansive qualities known as Shiva-tattva and Jiva-tattva. Shiva-tattva is between Vishnu-tattva and jiva-tattva.
A jiva (spirit souls like us) can never attain the position of Shiva Tattva what to speak of Vishnu Tattva. Therefore all the myth propagating the man is God in illusion, daridra-narayan, are all misleading.
Krishna, the Original and Supreme Personality of Godhead possesses 100% of the qualities, Vishnu posses 94% of His qualities, Shiva 84% and Jiva only 78%. Therefore even after meditation for millions of lifetimes, a Jiva can never become Shiva or Vishnu or Krishna.
Shiva is neither an ordinary living entity, jiva, nor a typical demigod. He is in his own category of existence, known as shiva-tattva. He is almost on the level of Vishnu, but because of his interaction with material nature, he is not counted as Vishnu-tattva, the category of Godhead.
When Krishna expands into a form, whose purpose is to assist Krishna in annihilation, this form is called Shiva. An example cited in scriptures is like Milk is Transformed into Curd by adding acid, Krishna expands Himself into Shiva by a mixture of Ignorance. Also although curd is made out of milk, it cannot be converted back to milk, similarly, although Krishna expands as Shiva, Shiva can not be Krishna.

kṣīraḿ yathā dadhi vikāra-viśeṣa-yogāt
sañjāyate na hi tataḥ pṛthag asti hetoḥ
yaḥ śambhutām api tathā samupaiti kāryād
govindam ādi-puruṣaḿ tam ahaḿ bhajāmi
Just as milk is transformed into curd by the action of acids, but yet the effect curd is neither same as, nor different from, its cause, viz., milk, so I adore the primeval Lord Govinda of whom the state of Śambhu is a transformation for the performance of the work of destruction.
[Brahma Samhita 5.45]

Factually Krishna is the origin of everything existing including Shiva. This has been confirmed in Bhagavad Gita as well.

ahaṁ sarvasya prabhavo
mattaḥ sarvaṁ pravartate
iti matvā bhajante māṁ
budhā bhāva-samanvitāḥ
I am the source of all spiritual and material worlds. Everything emanates from Me. The wise who perfectly know this engage in My devotional service and worship Me with all their hearts.
[Bhagavad Gita 10.8]

ahaṁ kṛtsnasya jagataḥ
prabhavaḥ pralayas tathā
... Of all that is material and all that is spiritual in this world, know for certain that I am both the origin and the dissolution.
[Bhagavad Gita 7.6]

Who is Lord of Shiva /

In Ilāvṛta-varṣa, Lord Śiva is always encircled by ten billion maidservants of Goddess Durgā, who minister to him. The quadruple expansion of the Supreme Lord is composed of Vāsudeva, Pradyumna, Aniruddha and Saṅkarṣaṇa. Saṅkarṣaṇa, the fourth expansion, is certainly transcendental, but because His activities of destruction in the material world are in the mode of ignorance, He is known as tāmasī, the Lord’s form in the mode of ignorance. Lord Śiva knows that Saṅkarṣaṇa is the original cause of his own existence, and thus he always meditates upon Him in trance by chanting the following mantra.
[Srimad Bhagavatam 5.17.16]

The most powerful Lord Śiva says: O Supreme Personality of Godhead, I offer my respectful obeisances unto You in Your expansion as Lord Saṅkarṣaṇa. You are the reservoir of all transcendental qualities. Although You are unlimited, You remain unmanifest to the nondevotees.
[Srimad Bhagavatam 5.17.17]
O my Lord, You are the only worshipable person, for You are the Supreme Personality of Godhead, the reservoir of all opulences. Your secure lotus feet are the only source of protection for all Your devotees, whom You satisfy by manifesting Yourself in various forms. O my Lord, You deliver Your devotees from the clutches of material existence. Nondevotees, however, remain entangled in material existence by Your will. Kindly accept me as Your eternal servant.
[Srimad Bhagavatam 5.17.18]

It has been described in Vedic scriptures that Krishna as Vishnu is the cause behind all causes. Krishna is the Adi Narayan. However, Shiva Puran seems to deviate from this truth. This causes bewilderment in the minds of people worshipping Shiva as Supreme. So is Shiva Puran telling a lie?
Shiva himself tells Parvati about the classification of Puranas. He says the 18 major Puranas can be categorized into three groups based on their target audience's modes of material nature - goodness (sattvik), passion (rajashik) and ignorance (tamasic).

Later on, Shiva further instructs Karthik on how to deal with Tamasic Scriptures

shiva-shastreshu tad grahyam bhagavac-chastra-yogi yat
paramo vishnur evaikas taj jnanam moksha-sadhanam
shastranam nirnayas tv eshas tad anyan mohanaya hi
The statements of the Saiva scriptures should be accepted only when they agree with the Vaishnava scriptures. Lord Vishnu is the only Supreme Lord, and knowledge of Him is the path to liberation. That is the conclusion of all the scriptures. Any other conclusions are meant only to bewilder the people.
[Skanda Purana, Lord Shiva tells Kartik]

vrndavanavani-pate jaya soma-soma maule sanandana-sanatana-naradedya gopesvara vraja-vilasi-yuganghri-padme pretim prayaccha nirupadhi namo namaste
O gatekeeper of Vrndavana! O Soma, all glories unto you! O you whose forehead is decorated with the moon, and who is worshipable by Sanaka, Sanandana, Sanatana, Narada and other great sages. O Gopisvara! Desiring that you bestow upon me divine love for the lotus feet of Sri Sri Radha-Govinda who perform joyous pastimes in Vraja-dhama, I offer my respects unto you again and again!
[Srila Visvanatha Cakravarti Thakura, Sankalpa-Kalpadruma 103]

Thank you for reading this article.
If You have Liked it, then please share it with your friends and loved ones. Please feel free to suggest how can we further improve our service. For more interesting articles please check - https://www.padaseva.in/p/sitemap.html
PreviousDid You See Your Doctor?
NextHH Bhakti Charu Swami Maharaj – Graces ISKCON Dumdum | March 2020

3 thoughts on “Who is Lord Siva? | Surprising Facts You Didn’t Know About Lord Shiva”