The incompleteness of the above definition

It says - The accomplishment of an aim or purpose. My aim is to reach the office on time, and, I do reach on time. Am I to consider myself a successful person? It says - The attainment of fame, wealth, or social status. What amount of Fame (if can be measured), wealth or status can be considered a success? If a beggar sleeping on the roadside gets a job which can provide him a daily meal, a place to live and fresh clothes to wear – is a success for him, but, the same job for a multi-billionaire would mean nothing. A kid – might find the joy of success in completing a puzzle game or builder game, but for a grown-up adult it returns no emotion. For a toddler learning to walk is a great achievement, which is applauded by every relative, but, he cannot carry that achievement throughout his life. It would be really ridiculous if in a job interview he addresses that one of his achievements is He has learned to walk when he was a toddler!!
Many looks at fame & glamor as the criteria for being successful. They “worship” film stars, sports stars, politicians as “Successful Personalities”. But meet any person who is too busy with their life, who doesn’t have time to waste in front of the Television, they might not even recognize these so-called “stars”.
The term Success and being Successful if analyzed without proper knowledge seems so contextual and personal that it is very difficult to come to a specific definition. Hence most of the books and websites say – Success is what you define it to be. But is it not vague?

Any machine or gadget we buy comes with an operational manual. It is being advised by the manufacturers that each and every user must read these manuals first. Users are really FREE to disregard the manual but there comes a warning. They might run into accidents or spoil their gadgets or even harm or kill themselves. We also have been provided a Manual to lead our life happily – Vedic Scriptures. We disregard the Vedas and that is why we run into so many problems. The current generation is so much worried about being Successful but they have no idea what is Success. They all land up with some vague concepts set some “aims” or “goals” of life (which keeps changing) and end up making their life more miserable. Many conveniently call these miseries “hard work”. Real Success should always be accompanied by Satisfaction & Happiness, not momentary happiness. Then what is a Real Success?

Be it a dictionary or any counselor or scriptures, all will be agreeing to a common definition of Success – Overcoming a problem. Now, what is a problem? Normally our perception is any distress or miseries we face or hurdles we encounter, we think them to be a problem. A few examples of problems can be a puzzle for kids, exams for students, promotion for an employee, votes for politicians, groceries for a homemaker, recipes for a chef, etc.  Now as we have seen earlier a problem for a kid might be of least interest to any grown-up, problem for a student would be of least interest to an employee. There was once an employee, disappointed due to not being promoted for the seventh time and thus being rejected by the lady of his life, went to a cliff with a wine bottle in hand, for committing suicide. There he met another person who was sleeping there. Upon asking the reason, he came to know that this fellow had lost his home, entire family, relatives, his entire neighborhood in a Tsunami. Hence he sleeps on the cliff. Then he realized his problem was too petty to end his life. Thus our so-called miseries are very insignificant, they will come and go like season changes. As stated by Lord Krishna in Bhagavad Gita – 2.14

O son of Kunti, the nonpermanent appearance of happiness and distress, and their disappearance in due course, are like the appearance and disappearance of winter and summer seasons. They arise from sense perception, O son of Bharata, and one must learn to tolerate them without being disturbed.

These personal problems are like common cold which is not a major concern for an intelligent person (even though the patient suffering might foolishly assume it to be) but a life-threatening disease like cancer is a real concern for the entire humanity. Similarly, a Real Problem is one which is common for everyone but with a solution not known to many.  Real success would be to conquer these problems.

There are four major problems in each one of our life – Birth, Disease, Old Age and Death. 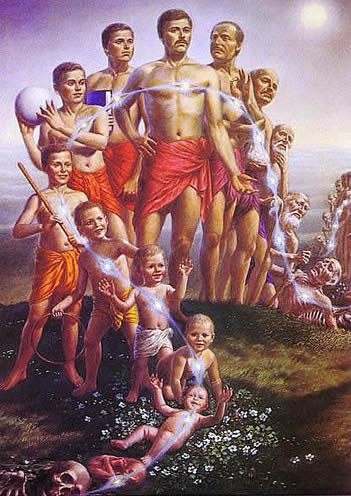 Meet any counselors or go through any books or go to any top universities or any scientists – no one can give you any solution on how to overcome these Major Problems. Instead, they would divert our attention from these. The reason is, they themselves do not know the solution, because, they have not gone through the Manual of Life (Vedic Scriptures)

While modern science was blind about life in a womb until a few hundred years back, Srimad Bhagavatam, written thousands of years back, already has detailed information about the Human Embryo growth on a weekly interval span. Similarly, a mundane materialist celebrates the birth, but, they are unaware of the terrible pain, trauma and helplessness the soul is undergoing in the tender body when in the womb, which is again mentioned in great detail in Shrimad Bhagavatam [Canto 3; Chapter 31].

It would be easier to understand the pain and suffering undergone when one is in either of the above conditions. What is inconceivable to us is also said in scripture (Garuda Purana), when a person dies he suffers an unbearable pain of 42,000 scorpion bites. None of us want to be diseased, grow old or die. (This is the reason why we work hard and spend our money in gym & parlor to look young and lovely always, but fail.) After reading the pain of birth as described with great accuracy & details in Shrimad Bhagavatam, the intelligent amongst us, would not opt for that even. 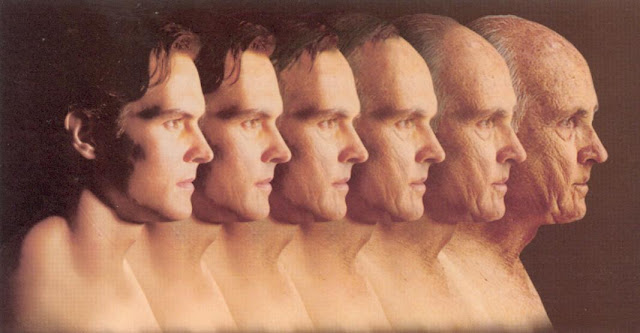 It will be a REAL SUCCESS to overcome the aforesaid FOUR MAJOR PROBLEMS of our life  – Birth, Disease, Old Age and Death.

How to be Successful?

Just imagine a life where we never have to take birth again, yet have our identity, never get diseased, never grow old and never die!!! Is it not what all of us want? Have you ever wondered why do all of us want this?  Because we all are Sat-Chit-Ananda, we are eternal and blissful. We all want eternity and happiness. But we do not know how to get it. Because no one has taught us where to look for an answer. Instead, we were taught to disregard the Manual of life - Veda with an excuse for scientific advancement. It is stated in Bhagavad Gita, this material world is a place of miseries & is temporary in nature (duhkhalayam asasvatam), a place where everything has to perish; everyone has to die, starting from an insignificant bacteria to great demigods like Indra, Brahma everyone. Since we aim for is an eternity, this temporary world is not our place. But where to go? Scriptures, like Bhagavad Gita, give us an idea about a world that is eternal, where no one dies.

Bg 8.16 — From the highest planet in the material world down to the lowest, all are places of misery wherein repeated birth and death take place. But one who attains to My abode, O son of Kuntī, never takes birth again.

Just like an ignorant tribal person might laugh at us if we say we have a device called telephone using which two people from two different countries, can speak; a frog in the well laughs when he comes to know the size of Antarctic Ocean is million times its well, some of us too may laugh when they hear about The Eternal World, but, the fact doesn’t change. There IS a telephone, there IS Antarctic Ocean and there IS an Eternal World. Now that we know we are eternal in nature but trapped in a temporary world, we have to escape to The Eternal World. Our success formula will be to reach Krishna.

Why reach Only Krishna?

Because, apart from the fact that, Krishna is the Supreme Personality of Godhead, He also says something that neither anyone else has said in past nor anyone else can say in the future.

Bg 15.6 — That supreme abode of Mine is not illumined by the sun or moon, nor by ﬁre or electricity. Those who reach it never return to this material world.

Bg 8.15 — After attaining Me, the great souls, who are yogīs in devotion, never return to this temporary world, which is full of miseries, because they have attained the highest perfection.

Bg 7.14 — This divine energy of Mine, consisting of the three modes of material nature, is difﬁcult to overcome. But those who have surrendered unto Me can easily cross beyond it.

How to Reach Krishna?

Bg 8.14 — For one who always remembers Me without deviation, I am easy to obtain, O son of Pṛthā, because of his constant engagement in devotional service.

Bg 8.8 — He who meditates on Me as the Supreme Personality of Godhead, his mind constantly engaged in remembering Me, undeviated from the path, he, O Pārtha, is sure to reach Me.

Bg 9.34 — Engage your mind always in thinking of Me, become My devotee, offer obeisances to Me and worship Me. Being completely absorbed in Me, surely you will come to Me.

Bg 8.5 — And whoever, at the end of his life, quits his body remembering Me alone at once attains My nature. Of this there is no doubt.

How to remember Krishna?

How much ever we try to remember Krishna at the time of death, it will be very difficult, as we would be suffering a tremendous pain of 42,000 scorpion bites!! So from now only we need to practice calling him out. This will re-establish our forgotten sambandha or relationship with Krishna. This is done by chanting the Holy Name, Mahamantra - Greatest Mantra. Hare Krishna - Hare Krishna * Krishna Krishna Hare Hare * Hare Rama - Hare Rama * Rama Rama Hare Hare.

The easiest way to reach Krishna and His abode of eternity, thus REAL SUCCESS in life can be summarized as - i. Chanting His Holy Name (Mahamantra) ii. Surrendering unto Krishna iii. Always remembering Krishna without deviation iv. Worshipping Krishna v. Being completely absorbed in Krishna 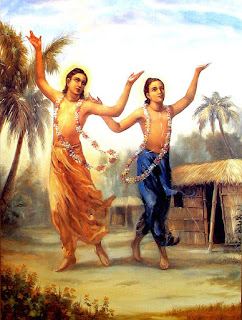 We pray to The Merciful Gaur Nitai, may each one of us get an intelligence to understand what Real Success means and become Really Successful in our life.
***
Thank you for reading this article.
If You have Liked it, then please share it with your friends and loved ones. Please feel free to suggest how can we further improve our service. For more interesting articles please check - https://www.padaseva.in/p/sitemap.html
Hare Krishna!
PreviousTransforming a Goat into a Human
NextWho are we? | Our Identity as Revealed by Science