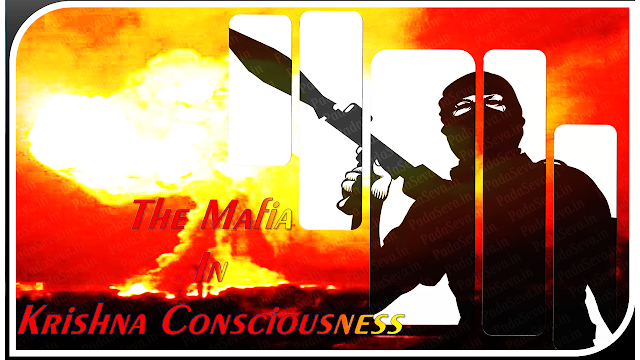 Very recently our heart was shattered by a brutal terror attack, in India. Speaking about terrorist attacks, we must be vigilant and extra careful not to become a victim.
Even in our journey of back to Spiritual Abode, Goloka Vrindavan, there is a risk from many mafia agents. Each moment we are at war with them.
There is a famous quote which says

If you know the enemy and know yourself, you need not to fear the result of a hundred battles.

Let us know our enemies carefully and also know our self-defense.
Master Mind Gangster: Maya Devi and Kaliyuga
Everything is actually orchestrated by these two partners. Very expertly they set up everything to make a devotee fall down from the path of Krishna Consciousness.
Spoiled Friend: Mind
The mind can be misleading. Just like a spoiled friend, mind leads us into the wrong association of these potential threats.
Petty Street Hooligans: Materialistic People
Street Hooligans are notoriously involved in breaking the peaceful ambiance of a society. A peaceful day turns chaotic because of sudden fights or stone attacks by these kinds of people. They can't be logically dealt with. Intelligence is to avoid confronting them.
A similar act is done by materialistic people. They can shatter a peaceful spiritual day by their stone-like atheistic or materialistic words. Scriptures and Acharyas warn us to avoid their association or at least minimize to bare necessity.
Cyber Criminals: Entertainment Industries
Cyber Criminals attack internet users and steal their secret information like user id, password, bank details etc. The victim gets penalized by an empty bank account. There was a time when there used to be true "Family Shows" and healthy comedy shows on TV which could be enjoyed by everyone in a family. However, the Entertainment Industry nowadays is nothing more an advertisement agency to break the four pillars of spiritual life - No Meat-Eating, No Gambling, No Illicit Relation, and No Intoxication. Just like the cybercriminals steal credentials, these industries steal the intellect of an aspiring devotee. They become attracted to the animalistic life promoted with the false promise of happiness.
Drug Dealers: Fake Gurus
Drug dealers use very tactful and promising words to attract their clients. Their initial warm welcoming words lead the victim to poisonous drugs. Least bothered about the health of their victims, they sell drugs only for money.
All the flowery language used by fake gurus, swamis, self-proclaimed Godmen and so-called incarnations are nothing more than the trap of a drug dealer. Many times they will disregard the Vedic literature which exposes their true identity.  They attract people looking for a shortcut in the spiritual life. However sweet may their words be or however intellectual may their words be, they are selling nothing more than poison for it is a warning in scriptures.

sampradaya vihina ye mantras te nisphala matah
atah kalan bhavisyanti catvarah sampradayinah
If one does not follow the four recognized disciplic successions, his mantra or initiation is useless. In the age of Kali there will be four sampradayas.
Padma Puran / Garga samhita 10.61.26

Suicide Bomber: Gossipers
Suicide bombers hide the explosives undercover and associates with an unsuspected victim. And soon both of them are dead.
As we get into the devotee association, sometimes we carry the misgivings of material culture. We bring in the culture of fault findings, envy, jealousy, pride. Soon we also start to gossip (do prajalpa) in devotee association. Anyone who is having a nature of gossiping is a potential suicide bomber. For certain his spiritual growth is destroyed and so is ours. The only way to help ourselves is to run away from such a person.
Deadliest Terrorist: Mayavadis
Hard-core terrorists are merciless, ruthless killing machines. They cherish the genocide and homicide and consider these heinous acts as their achievements. Sometimes Mayavadi attaches religious reasons for their inhuman activities. They pervert the actual meaning of holy scriptures and give their interpretation to support their activities. Their intelligence is so perverted that they do not realize they are committing sin.
Mayavadis are no better than this class of demoniac people. They twist the scriptural injunctions and cook their own interpretations. They come up with theories like Joto Mot toto Poth, Manav Seva Madhav Seva, Daridra Narayan, Everyone is God etc. The most heinous crime they do is, they deny the beautiful form of Lord. Because of this offensive nature, anyone who hears or reads such a theory or from such a person, his devotional life comes to an end forever.
This is confirmed in the Padma Purāṇa Uttara-khaṇḍa (25.7), in the words of Lord Śiva himself:

śṛṇu devi pravakṣyāmi tāmasāni yathā-kramamyeṣāṁ śravaṇa-mātreṇa pātityaṁ jñāninām apiapārthaṁ śruti-vākyānāṁ darśayal loka-garhitamkarma-svarūpa-tyājyatvam atra ca pratipādyatesarva-karma-paribhraṁśān naiṣkarmyaṁ tatra cocyateparātma-jīvayor aikyaṁ mayātra pratipādyate "My dear wife, hear my explanations of how I have spread ignorance through Māyāvāda philosophy. Simply by hearing it, even an advanced scholar will fall down. In this philosophy, which is certainly very inauspicious for people in general, I have misrepresented the real meaning of the Vedas and recommended that one give up all activities in order to achieve freedom from karma. In this Māyāvāda philosophy I have described the jīvātmā and Paramātmā to be one and the same."

The Māyāvādī philosophers have presented their arguments in such attractive, flowery language that hearing Māyāvāda philosophy may sometimes change the mind of even a mahā-bhāgavata, or very advanced devotee. An actual Vaiṣṇava cannot tolerate any philosophy that claims God and the living being to be one and the same.

Śrīpāda Śaṅkarācārya has described all the Vedic literatures in terms of indirect meanings. One who hears such explanations is ruined.
Sri Caitanya Caritamrita 1.7.109

Śaṅkarācārya, who is an incarnation of Lord Śiva, is faultless because he is a servant carrying out the orders of the Lord. But those who follow his Māyāvādī philosophy are doomed. They will lose all their advancement in spiritual knowledge.
Sri Caitanya Caritamrita 1.7.114

However, each one of us is having a facility to safeguard ourselves from the attack of these vicious agents
Field Marshal: Chaitanya Mahaprabhu and Nityananda Prabhu
General: Acharyas of bonafide Sampradaya like Srila Prabhupada
Brigadier: Spiritual Master
Colonel: Mentors or Counselors
Soldiers: Devotees
Bunker: Devotee Association
Hand Grenades: Scriptures
Machine Gun: Chanting the Mahamantra Nuclear Bomb Shield: Shelter of Krishna
Let us all use our self-defense, only then can we remain safe in the journey back to Godhead.
***
Thank you for reading this article.
If You have Liked it, then please share it with your friends and loved ones. Please feel free to suggest how can we further improve our service. For more interesting articles please check - https://www.padaseva.in/p/sitemap.html

One thought on “The Mafia in Krishna Consciousness”